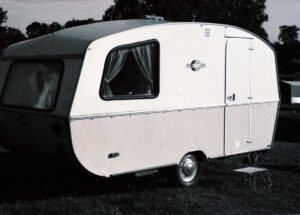 Cabby is one of Sweden’s most known caravan brands. It has been around for 50 years and has always been one of the largest manufacturers. Since its inception, smart solutions and solid living comfort has been the core of the Cabby brand. Unfortunately, the factory went bankruptcy in early January 2016, and it remains to be seen what will happen in the future.

This is in all cases Cabby’s 50-year history:

It was the industrialist Tore Nilsson, who saw the potential of a really well-built caravan for year-round use. He had previously been camping in tents but was tired of all the hassles tenting meant. The first Cabby caravan was built in the fall of 1964 by the newly formed company.

In 1965 there was on model to choose from. It was called simply Cabby and had a body length of 3.9 meters. 50 caravans were built this year and total employment stood at 12 units. In 1966 Cabby began exporting to Norway thanks to Tore Benjaminsen. The price of the standard model were 14 000 Norwegian crowns. In 1967, 680 caravans were produced.

In 1968 Cabby built a new ultramodern factory of 3800 square meters, for a total of about 3 million crowns. It was the largest caravan factory in Scandinavia and one of Europe’s most modern. The same year a sales office was set up for the Norwegian market, with Stein Øvstegård as manager.

In 1969 the company was sold to the American multinational Boise Cascade. In 1972 a dealer network was established while direct sales from the factory closed down. Already in May, this year’s caravan production was already sold. Cabby later became part of a large caravan group where even the English Cavalier, French Digue and the Dutch Kip were included. In the Cabby factory they produced 2,600 caravans, of which 800 were exported. Cabby now also took on the English market. In the mid-1970s, Cabby became the market leader in Norway. 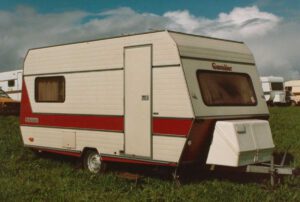 In 1978 Cabby introduced the brand name Cavalier as an entry-level alternative to Cabby. Body design was the same. In 1979 Cabby bought 75% of the shares in French brand Digue. The Cabby Group with brands Cabby, Kip, Digue and Cavalier was now Europe’s second largest producer after Adria. A total of 26 000 caravans of these brands were built this year.

In 1986, AB Carry Special trailers was found as a sister company, manufacturing trailers for different purposes. In 1989 founder Tore nilsson died. His son Per Nilsson took over, and sales manager was Olle Bergholm previously responsible for the Norwegian market. 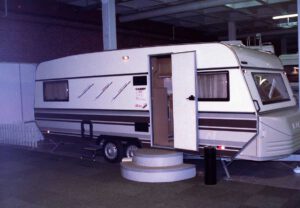 In 1991 caravans were exported to Norway, Denmark, Finland, Holland and England. At the turn of 1990/91, the production was down for two months.

In 1992 Olle took Bergholm toke over imports of Knaus, and new sales manager for Cabby became CEO Per Nilsson. At the Elmia Fair in 1992, Cabby recieved the “Industry Invention Of The Year Award” for its new refrigerator ventilation.

In 1993 the making of motorhomes restarted. Cabby now began export to Germany. 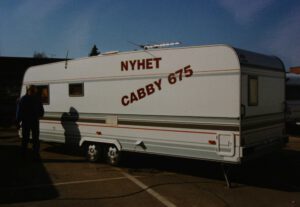 In 1995, the caravans got a new gray-green coloring on the outside. They were built in two ranges, Novia and Trendy. This year Cabby sold about 100 motorhomes.

In 1997 the range consisted of the ranges Holiday, Elegance and Crown. In Autumn 2000 Cabby was included in the Tirus Group, which also included brands Kip and Chateau.

In 2003 CaravanConsult AS became responsible for the import of Cabby to Norway. 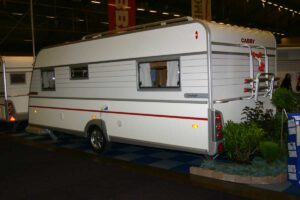 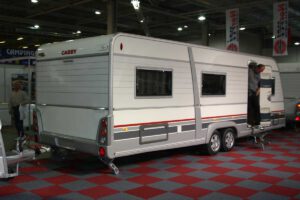 In 2009 the Black Line was presented as an extra equipped version of the 620 + F3. It was supposed to only be built in a limited edition and only one model. Later, however, the Blackline 800+ FT and 800+ FTF Were added.

In 2011 Blackline was renamed to Caienna and became available in all sizes and layouts.

In 2014 the Cabby 900 was presented, the largest model Cabby ever built. Interior length was 8 meters and initially there were two floor plans, 900 LM Single and 900 F2C Family. 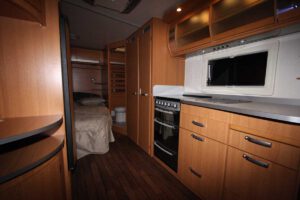 I work at a caravan rental company in the village of Fritsla in southwest Sweden. I´m also a writer for a caravan magazine named Husvagn På Väg, and the webb portal Campingsverige.se.

My blog Caravanum.se is about history of caravan brands, news in the industry and also reports from my own camping trips.